Posted on July 26, 2011 by adelphipaperhangings 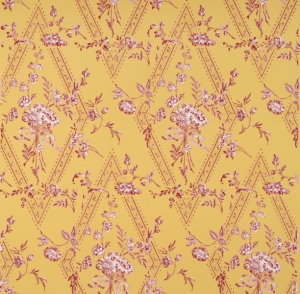 In February of 2010 we were contacted by Lady Halina Graham.  She and her husband, Sir James, were in midst of renovating the Graham family home, Norton Conyers, near Ripon, in North Yorkshire, England.  During the course of an extensive renovation an 18th century wallpaper was discovered and they were contemplating having it reproduced.

Lady Graham writes:
“Norton Conyers is one of the most complex and largest timber-framed houses in the north of England. A house has stood here since Viking times and each generation has put their own mark on the building. Outside each of the facades looks as if it belongs to a different building. Inside recent research has established that several different buildings of different periods were incorporated into what is now Norton Conyers. 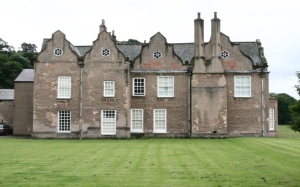 The wallpaper was found behind 18th century paneling in a cupboard next to the house maid’s room. We know that the house maid’s room was originally much larger and grander but part of it was done away with when the 1780s ceiling was created. We do not know if this was the original place for the wall paper or whether it had been used in the grander rooms downstairs. This room had wallpaper which was stuck onto canvas and held together by a wooden frame and we found evidence of a soft woolen-type fabric which would have given it a much softer look which we are told was French”.

As the scale of the pattern is relatively large it was fortunate that the Graham’s were able provide us with sizeable sections of the original. This allowed us to compare several repeats and verify pattern elements where either paint loss had occurred or where the printing was slightly out of register.

The fashion for using border meant another bit of luck for us.

While most of the fragments were badly discolored the edges which had been covered by border retained enough of the color to, after analysis, be duplicated.

It’s not surprising that since Norton Conyers Diamond, Pagodas and West St. Mary’s, all date from approximately the same time period that they share some basic design characteristics. 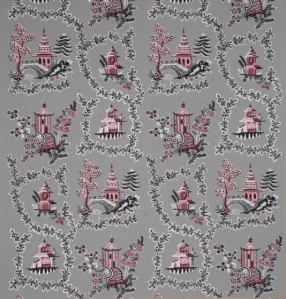 The first colors on all three are simple, localized areas of the design.  For Pagodas these shapes were applied using stencils.   Whether the first color was stenciled on Norton Conyers is difficult to determine. There are very few points at which the paint edge was discernable –it is at this edge where it’s sometime possible to detect brush marks, an indication of stencil use.

The second color defines and gives specific details to the shapes of the first color but doesn’t necessarily unify the overall pattern.

And Jane Eyre?  Well, Charlotte Bronte actually.   In 1839 she visited Norton Conyers.  Apparently she was intrigued with the story of a “madwoman” locked away in the mansion’s  attic 6o years earlier.  Of course, details of the space and the mansion later were retold in the description of Thornfield Hall in Jane Eyre. No mention was made of a yellow wallpaper.